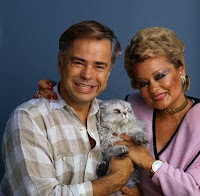 -Tammy Faye goes to the big mascara tube in the sky. I admire her bravery in both her fight against cancer, having the balls to go on tv 48 hours before she died, and her unending compassion for persons with HIV/AIDS, especially in the early 80's, when even saying the word AIDS was taboo. However I can't help but think of the millions of dollars she and her felon husband (s) pilfered "in the name of God".

my somewhat-alter-ego...but more on that soon...want to keep a few things under the hat, for now. But do join us at Under St. Marks tomorrow for a quick visit!

-Professional sports referees MUST be regulated. Its beyond insane that out of the four major sports in this country, only MLB and the NHL pay their referees a yearly salary. Not keeping referees on the league's payroll is like having an open door at a bank vault and puts the sports at a very high risk, as we have seen, for game-fixing, point shaving, and fraud.

-F1 race at Nurburgring! Holy cow, (hopefully this link works) you've never seen hysterical until you watch 7 Formula 1 cars, 800 HP and 18000 RPM, with BALD racing tires, fly off the same rain-drenched corner one after the other, and pile into each other as if a 5 year old were throwing Matchbox cars! Luckily no injuries, but Liuzzi almost took out the pace car. After the mess and a slew of tire changes, Fernando Alonso (pictured, left) gets the win for McLaren. If the link doesn't work simply youtube search "F1 July 22 2007"

-Scott Dixon is the hottest driver in any racing class, taking his 3rd win in a row at Mid-Ohio.

And I hope Harry Potter was printed on recycled paper. Not counting on it, though.