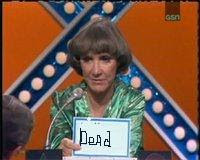 You may have heard Brett Somers died this weekend. In her will she requested she be buried in _____________

Brett Somers at a Westport Historical Society exhibit in November 2003 in front of a picture of herself upper right. Somers’ son, Adam Klugman, said she died Saturday at her Willow Walk home near Staples High School.

She married actor Jack Klugman, star of the television shows “Quincy” and “The Odd Couple,” in 1953. The two separated in 1974, but never divorced. Somers appeared on several episodes of “The Odd Couple,” playing the ex-wife of Klugman’s character.

Later in her career, she appeared in a cabaret show, “An Evening with Brett Somers.”

She moved to New York at age 18 to pursue a career in acting and eventually became a U.S. citizen.

She changed her first name to Brett after the lead female character in the Ernest Hemingway novel “The Sun Also Rises.”

Somers began her career in the theater and made early television appearances in theatrical programs such as “Philco Playhouse,” “Kraft Theater Playhouse 90.” and “Robert Montgomery Presents.”

Her Broadway debut, in the play “Maybe Tuesday,” lasted for five performances in 1958. Elsewhere, she appeared onstage in “Happy Ending,” “Seven Year Itch” and “The Country Girl” opposite Klugman.

After Somers and Klugman married in 1953, they had two sons, Adam and David. The actress also had a daughter, Leslie, from a previous marriage.

In the 1970s, Somers became well known as a regular on TV’s “The Match Game,” in which she traded barbs with her close friend and fellow panelist Charles Nelson Reilly.

When Klugman appeared on the first week of the show in 1973, he suggested that producers sign his wife as a regular.

She was an immediate hit and remained on the panel for the rest of its nine-year run.

She continued to perform after being diagnosed with cancer, including the 2003 cabaret show, “An Evening With Brett Somers.”

She made occasional appearances in Westport in recent years-in 2003 at a Westport Historical Society exhibit of television personalities from the area, and a 2005 charity benefit at Mitchells of Westport.

Her son said she was caustic, irreverent and a self-declared bohemian.

“She maintained her independence till the end, and her irreverence,” Adam Klugman said. “She died very much at peace.”

Late today, GSN, formerly the Game Show Network, announced that it will honor Somers in an all-day marathon Saturday.

The Somers’ “Match Game” tribute will air from 9 a.m. to 4 p.m. ET and will feature some of the best moments from her years of work on one of America’s all-time favorite game shows.

Additionally, on Sunday night (Monday morning) Sept. 23 at 3:30 a.m. ET, GSN will air an episode of “Password” from 1971 where she appeared with then-husband Jack Klugman, as the other celebrity guest.

RIP BRETT
may you, Charles, and Gene be having a GREAT MATCH GAME IN THE SKY tonight!!!

DAMMIT she was great
Posted by Jen Ryan's Brain at 11:25 AM 2 comments: