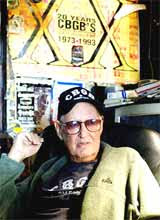 There's something wrong here where the best ones want to go
Parker, Lautreamont, Monroe
they held it just to throw
The world away who were its grace before they left
To choose to have a point of view oblivious that leaves the rest of us bereft
There I see the piercing eyes that look through all u
ntil they see their back
There where any thought will think about itself and that's the only fact
There a man has left just death, delerium, and drugs,
or feel the lack
The air is cool today the time is drawing near
My walls are white and so's my brain afloat in self-made fear
A banal feeling of the sort "I ain't insane"
No fate worse than to never leave yourself
and it's as well the most repulsive pain
The air is cool today that whistles through my ribs
My skull is full of sand that dribbles down upon my bib
I call out "Baby" but her face looks like a clock
Tick tock, alive, triumphant victims so surprised
we can't recover from the shock
Me, I like a joke as much as anybody else
but some are rough
Yeah when the joke's on you though you're the joker too you've had enough
Then though there is no one there, because there's nothing there,
you call your bluff
-Richard Hell and the Voidoids
Posted by Jen Ryan's Brain at 1:36 PM No comments: